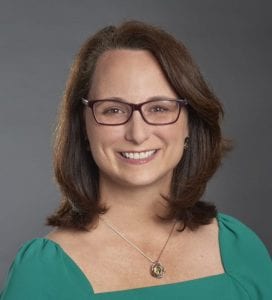 Born and raised in Manchester NH into a large Irish Catholic family, Stephanie attended Manchester Central High School before heading to Boston for college, where she studied Journalism and Political Science at Northeastern University. After college, Stephanie worked for The Boston Globe, The City of Boston, Mayor’s Office and in Public Relations prior to coming back to New Hampshire, where she worked for Business NH Magazine and Sheehan Phinney Bass & Green. In 2007, Stephanie started her own Marketing and Communications company, Savoir Faire Marketing/Communications. Stephanie currently lives in Manchester, with her husband Patrick Parkinson, is the daughter of Joanne and Stephen McLaughlin, she has 2 bothers and is an incredible aunt to her nieces and nephews and a great friend to many.

Since being back in Manchester, Stephanie has been involved in several different organizations in the community including but not limited to-
University of New Hampshire- Manchester Advisory board,
City of Manchester Heritage Commission
Manchester Young Professional Network (one of the founding members)
Manchester St. Patrick’s Parade Committee
Ghostlight Society of the Capitol Center for the Arts
NHADEC
Leadership Greater Manchester (Class of 2016)
Manchester Chamber of Commerce

Stephanie was the recipient of the Stay Work Play Leadership Award

Coming from a large Irish, Catholic family, Stephanie is proud of her heritage and in 2006 became a member of the Manchester St. Patrick’s Parade Committee where she served for 9 years. Stephanie worked hard to market the event and have a large presence in the media, often joining radio hosts on St. Patrick’s Day at local establishments to chat about the parade on radio shows. Stephanie helped recruit parade day volunteers when she was on the committee and also made the connection with the parade’s current banner carriers.
After serving on the committee, Stephanie continued her involvement with the parade as she emceed the event from the viewing stand.

Stephanie continues to give back to the Manchester community through attending Career Days at her alma matter, Central High School, serving on the board of the Phaneuf Family Foundation, working with Business NH Magazine on recognizing top businesses to work for in NH and more.