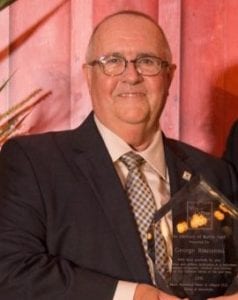 The Manchester Saint Patrick’s Parade Committee will honor George Rousseau as the 2020 recipient of the Thomas J. King Award.

This award is presented to an individual who is not of Irish heritage or not of Catholic faith who has contributed to the betterment of the greater Manchester area.

George is CASA advocate and has been for more than 18 years. In that time he has worked on 11 cases supporting 18 children, driving as many as 2500 miles per year to meet with and follow up with the children he represents. These numbers prove that he is making a difference in his community. He is a talented and dedicated advocate, valued and treasured by everyone associated with CASA.

In addition to being an excellent advocate, he has also volunteered to be a team captain for the CASA “100 Men for 100 Children” campaign in 2015. He has been featured in many CASA marketing videos and hosted many advocate support meetings in his home.

George has been described as “Dependable”, “Dutiful”, “Reliable”, and “Ardent”. These are all excellent qualities for someone who advocates for some of New Hampshire’s most vulnerable children. He works diligently for the children whom he represents, and is enthusiastic as he works towards permanency for the children he serves.

George is considered by all service providers, the Court, and the DCYF (Division of Youth, Children and Families) as being very solid and trustworthy. He works well with parents and foster parents and is well respected and admired for his frankness in situations that are very emotional and difficult.

George has a wonderful sense of humor that helps him to connect with both parents and foster parents, making them instantly feel comfortable with him and not threatened which allows him to be very successful as an advocate for children.

Rousseau is known as a man of high caliber and integrity, and is dedicated to ensuring that children have access to safe, nurturing and permanent living situations. He visits the children wherever they may be living. Additionally, he considers the opinions of their parents and social workers. He attends their educational and therapeutic sessions and numerous judicial hearings before making his recommendations. It’s a complex process as evidenced by Rousseau putting nearly 2,500 miles on his car last year.

George serves his parish, St. Pius X, as a Eucharistic Minister and as a member of the Grief Team. He collects information about the decedent and their family so that a funeral may be more personal which promotes healing. He can identify with the families and help them to speak about the decedent with their hearts.

George Rousseau is the embodiment of the Thomas J. King Award. Please come to the Parade on Sunday, March 29th at noon to help us honor him as this year’s recipient.